Break the Silence on Domestic Violence in Nunavut

In 2019, Pauktuutit Inuit Women of Canada (Pauktuutit) and the Law Society of Nunavut (LSN) partnered to launch a project to break the silence on domestic violence in Nunavut. The aim was to better understand the legal barriers and needs of Inuit women when dealing with domestic violence. The project consisted of research studies leading to a follow-up public awareness campaign. With the guidance of an advisory board and the support of the government and community partners, Pauktuutit and LSN sought to better understand the effectiveness of the Family Abuse Intervention Act (FAIA).

The Phase I Report on Preliminary Findings present stories and perspectives of Inuit women with lived experience along with seven focus groups composed of Inuit and non-Inuit service on family violence in Nunavut and the legal system as it relates to the FAIA.

Through the interviews and focus groups and finally through the validation of findings workshops, Pauktuutit and the LSN heard that there also needs to be other forms of support and programs, such as parenting programs, Inuit-specific prevention and wellness programs, programs on healthy relationships, shelters and healing programs for abusers, and safe housing for both the abuser, the victim, and their children (including second stage housing and affordable housing). Recommendations are specified by sector to enable entities to identify their role in finding collaborative, holistic solutions (e.g. Community Service Providers, Government of Nunavut- Department of Family Services & Department of Justice, Nunavut Court of Justice, Schools & Youth Programs and RCMP.)

On International Women’s Day 2021, a public awareness campaign was launched to support Nunavummiut in recognizing the different forms of abuse and where to get help.

STANDING TOGETHER, LET’S BREAK THE SILENCE ON FAMILY VIOLENCE & ABUSE IN NUNAVUT 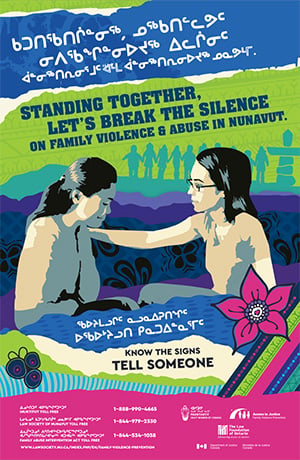 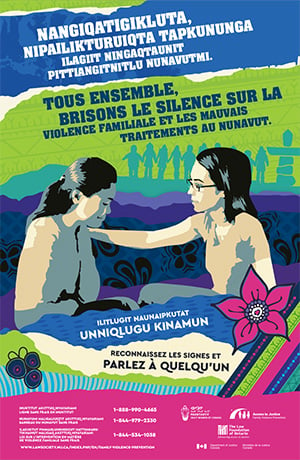 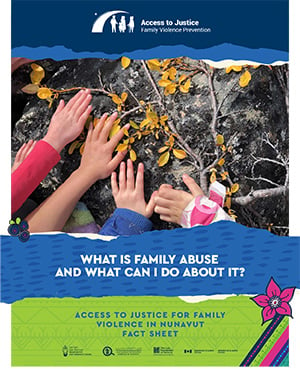 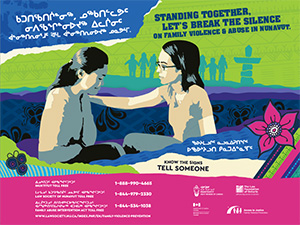 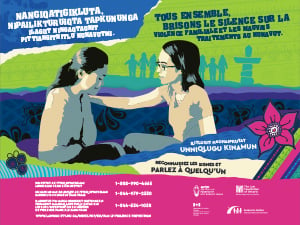 Let’s break the silence on family violence and abuse in Nunavut, together